With its glorious natural scenery, excellent climate, welcoming culture and excellent standards of living, Spain is quickly gaining a reputation as one of the most desirable places across the world to live or visit. On offer here is a chance to make a smart financial investment into this magnificent part of the world.

Apartment with 2 bedrooms and one bathroom in the urbanization Viñamar V, La Mata. The apartment is in good condition, has a 12m2 terrace, independent kitchen with breakfast bar, it also has built-in wardrobes. There is a ceiling fan in the living room and in the rooms.

The apartment is for sale with furniture and appliances and is located in a building with an elevator. It has 60 m² built and between 20 and 25 years of construction. The residential is private and has a nice swimming pool open all year round. The building also has disabled access.

The property is close to all services within walking distance, 300 meters from La Mata beach and the promenade, where you find restaurants open all year round.

For keen golfers there are 3 award winning Golf courses within a fifteen minute drive of the apartment. It’s also a great place for biking, people often hire bikes then bike along the beach to Torrevieja in one direction or Guadamar in the other direction. Alternatively there is a boardwalk stretching to Torrevieja, and service roads at the side of most major roads that are really quiet and virtually empty.

La Mata is on the eastern part of the Costa Blanca and as such has some fantastic sunsets.

La Mata is easily accessible from the two airports of Murcia and Alicante each about a forty minute drive away by car, of course if you don’t wish to drive you can just take a taxi and walk everywhere you need to. Getting a taxi from Alicante airport to Torre La Mata costs approximately €80.

There are a few budget airlines servicing Alicante and Murcia including Ryan Air, Monarch and Easyjet.

La Mata is a coastal resort located on Spain’s Southern Costa Blanca. La Mata is closest to Torrevieja and with all the property development of recent years the towns have now merged into each other.

La Mata has become more and more popular as a tourist destination because of its lovely beaches. Although the Costa Blanca is famous for international tourism, La Mata is very popular with Spanish domestic tourists. La Mata, officially known as TorreLaMata and sometimes referred to as LaMata and Torre La Mata, is an excellent place for a holiday in Spain and unlike a lot of towns on the Costa Blanca, it still retains a Spanish identity.La Mata, on the Costa Blanca, in Spain

The village of La Mata is a developing tourist centre and one of the more popular Spanish villages on the Mediterranean coast. However, you’ll find it’s not nearly as commercialised as the Costa Blanca resorts to the North of Alicante. It still retains that special “Spanish” feel and is in a relaxed environment.

You’ll also see, that La Mata has learned a few lessons from other tourist destinations, because in La Mata, you’ll find no high-rise skyscrapers or package holiday hotels and still retains a Spanish way of life.

The concentration of salt and the temperature, combine to endow this area with a particularly healthy micro-climate, recommended by doctors for its beneficial properties. Bathing in the salt lagoons is also becoming popular for many medicinal reasons. The climate in La Mata makes it an ideal location for year round holiday activities, especially if you want to fulfil that yearning for some sunshine during those dreary winter months in the UK.

On average, La Mata enjoys 320 days of sunshine per year and an average daily temperature of 17°C. Temperatures in July and August are typically 28°C. Many people prefer the months when the weather can be near perfect: April, May, June, September, October and November.

La Mata offers all the typical activities for the holidaymaker and as you go through this website you’ll get a flavour of what’s on offer.

Go down to the beach at La Mata and walk along the front, at lunch times and in the evenings this area and the surrounding streets are a hive of activity, with many busy cafes, restaurants and bars. These streets also offer many shopping opportunities, plus, the street market is in La Mata every Wednesday morning, (see the market page here for more details).

• 60m² of living space
• 2 bedrooms
• 1 Bathrooms
• Stunning Views
• Massive potential in the rental market
• Close to essential amenities like such as supermarkets and pharmacies
• Close to many excellent bars and restaurants
• Great base from which to discover other fantastic areas of Spain
• Many excellent sports facilities, walking and cycling areas nearby 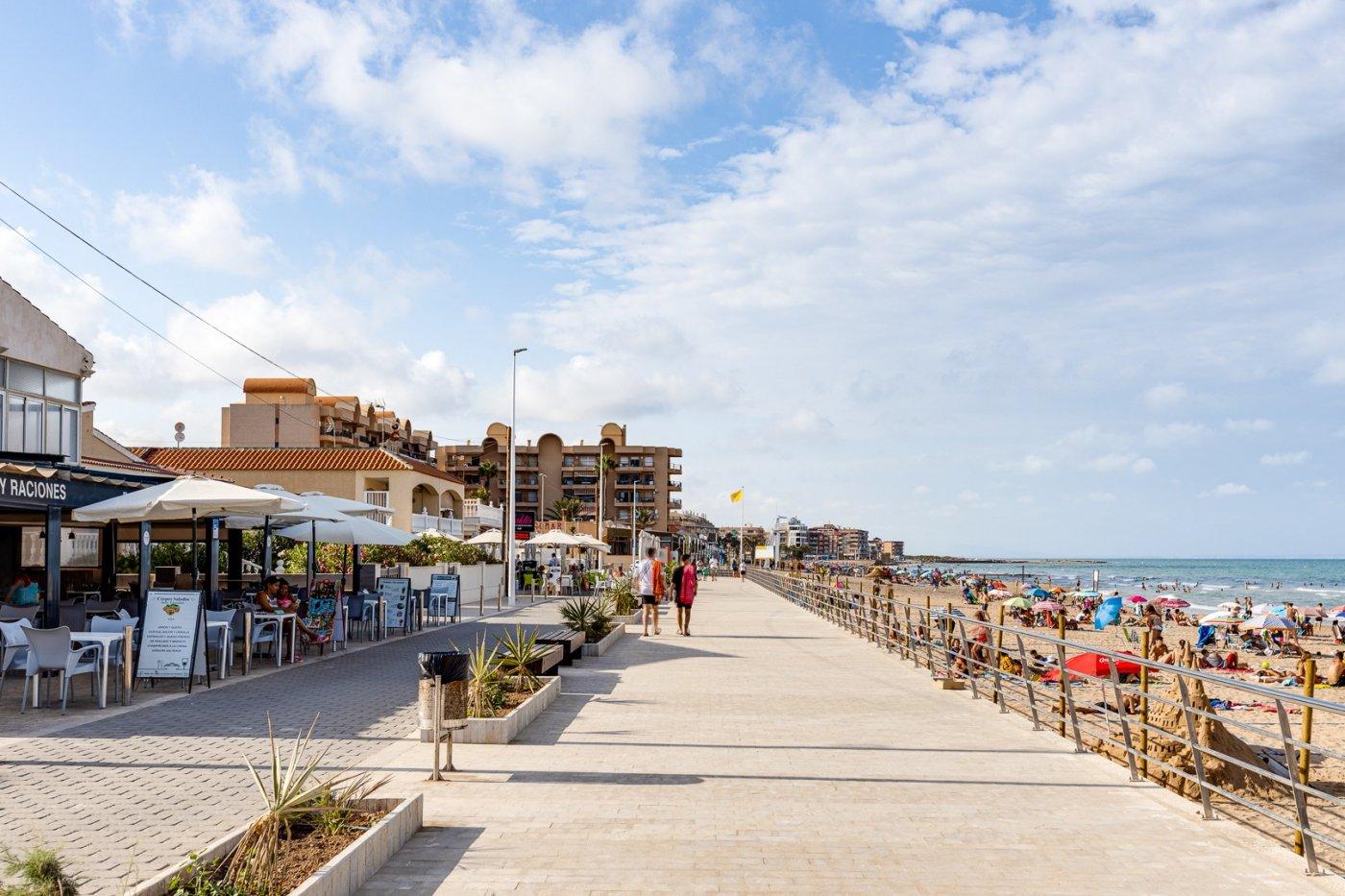